‘Sakawa boy’ Nana Wan confesses in Church
He told in the church about his journey from an orphan boy to one of the richest men in Ghana
A popular Sakawa boy known as Nana Wan, aka Mr Wealth – who is the President of 2hype Music and C.E.O of Waife Group of Companies – has decided to give his life to Christ and forfeit all the evil money he made through rituals.
Nana Wan visited the Resurrection Power Chapel at Weija for his conversion, where he spilled all his guts about the evil things he did to gain his wealth, the babies and relatives he killed to maintain that wealth – and the ultimatum he was given for his death which finally led him to run to the Church to give his life to Christ.
GhBase got the scoop on Nana Wan’s conversion, and the tall tale he told in the church about his journey from an orphan boy to one of the richest men in Ghana, and the horrible things he had to do. It’s a truly incredible cock and bull story which we’ll do our best to summarise below…
According to him, he killed 115 babies to maintain his wealth, plus two sisters of his.
Narrating his life’s history to the shocked Church, the sakawa boy said he was forced to join after his dad abandoned his mum and she could not cater for him and his numerous siblings. So he followed some friends to Benin for rituals.
When they got there, they were met by a mermaid who asked each of them to drop Ghc 1,500. He said a crocodile came for the money and then they were told they had qualified if the crocodile did not return with the money.
His didn’t so he qualified.
He was then told to get any job for one week and quit, after which he should wait in his room with a ‘Ghana Must Go’ bag. He was then visited by a beautiful lady mermaid who asked him how much money he wanted (he asked for Ghc 20m) and which she then made materialise into his bag.
He got the same amount every week, and the mermaid became his girlfriend of sorts as they always had s*x. He said things were going smoothly until three years in when she started making demands for sacrifices.
He said she initially asked for babies, so he made an arrangement with a nurse at the 37 Military Hospital who supplied her with the babies for Ghc 100,000 each. He got 115 babies for the ‘maame water’ before the nurse said she could not go on stealing. He even sacrificed his own baby boy.
So he asked for other means to sacrifice and she asked for s*x for twenty times a day, later forty. He complied as long as he could but when he couldn’t he asked for other means of sacrifice. So she asked for his family members, and he said he bought cars for two of his sisters who both died in accidents not long after.
The spell broke, he said, when the mermaid asked for his mother. He said her pastor prophesied to her that if he offered a car she should refuse, which she did. So the mermaid told him he only had a week to live, which led him to the church looking for salvation.
So he narrated all his sins and asked for forgiveness, which was granted – and he’s lived beyond his ‘death’ date provided by the spirit. He’s lost all his wealth but at least he now has Jesus.
Source: etvghana.com 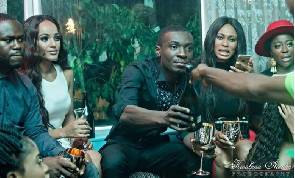 I Will Continue To Attack Nana Akuffo Addo Because He’s...