We never imagined a time will come when Kumawood Actor Lil Win would want to make his own bitters. The kumawood actor Kwadwo Nkansah aka Lil Win has revealed in an interview with that, he would want to introduce ‘I don’t think far’ bitters on the Ghanaian market.
He’s called on bottling companies in the country to partner him in producing the ‘I don’t think far’ and also ‘does I Care’ bitters in commercial quantities for sale.
He believes the locally brewed bitters  if put on the market, would generate millions of Ghana cedis for the companies, indicating that most of his fans will jump onto the bitters.
In the interview on Ultimate FM’s Brunch hosted by Naa Klordey Odonkor, the ‘I don’t think far’ hitter envisaged that bitters labelled ‘I don’t think far’ will make inroads than ‘Shatta bitters’.
He said the ‘Kakai’ hit maker has already made his mark in the industry and does not need money any more, saying he (Lilwin) needs lots of money.
He suggested to Shatta Wale to consult him for branding tips if he wants to produce Shatta bitters, adding that he would have long produced bitters labelled as one of his coined English, but lack the resources.
Who will drink or buy Shatta bitters, if he will produce bitters, then I will also come out with Lilwin bitters, he shouldn’t try, besides ‘I don’t think far’,  ‘does I care’ or ‘Lilwin gin’ bitters will make huge revenue for the bottling companies. Bitters labelled in my coined English will be bigger than any other drinks on the market. All the bitters will lose customers because of my drinks, bet me.
‘ Shatta Wale is already popular, he should allow me to enjoy fame small, I don’t have money to come out with Lilwin bitters, he should come out with a very creative name or better still consult me for a creative name with a stipend for his bitters if he really means business,’ he explained.
Lil Win will also be launching  his line of ‘I don’t think far’ t-shirts on the market for fans to buy.
Portion of article from
ultimatefmonline.com 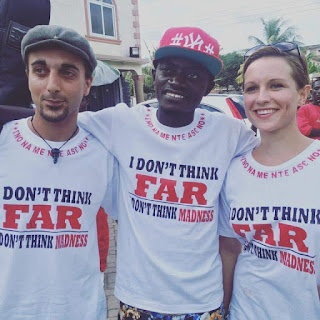 Pastor Commits Suicide After Sending Pictures Of His Penis To...