There was some news last night about Medikal and Joey B but the details were a bit sketchy so we didn’t report it  but we’ve been able to gather some details  now.
Joey B and Medikal were billed to perform  at some shows in Sunyani and from what we could gather, they were not paid the full part of the money. Medikal who was pissed off took to his Facebook page to pour out his frustration asking anyone to report one Papa Loggy, the brain behind the shows at which they played at. Medikal even promised an amount of Ghc5,000 to anyone who reported the man.
“Report this guy to the nearest police station. He goes by the name Papa Loggy. ASAP. 5k reward. Thank you.”
Medikal in an interview with Zionfelix.net disclosed that Papa Loggy billed Joey B and him for a show and that he owes them Ghc20,000 plus fight tickets.
“I want him arrested as soon as possible. He billed Joey B and me for a show somewhere. Before the show he told us that people did not come for the concert so we should go home but when we went to the venue, a lot of people were around.
So when we got there, we performed expecting our money to be paid after the show but we didn’t see him again.
We went with aeroplane so we had no cars there. Rain beat us and even damaged our laptops.
I’m looking for him, its not a joke” Medikal explained to Zionfelix.net
“He has to give us like Gh20,000 plus flight tickets and a lot of things. Right now my Macbook and Joey’s things are damaged. The rain beat us so one of my friends called X2 came to rescue us. He brought us to Kumasi because we have a show with Liwin this evening.
How we are to return to Accra we don’t know because we have to come byourselves. He has caused us a great damage.”
I’ve sent him a message to ask him why he is doing that and he replied that we are unprofessional workers. He is also blaming us because we are complaining of how he has treated us” Medikal told Zionfelix.net Monday evening.
Papa Loggy has refuted the claims of the alleged fraud leveled against him saying that, Joey B and Medikal are lazy and childish. 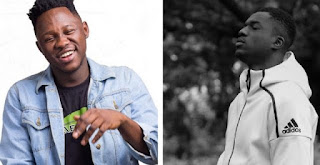 Pappy Kojo Reveals That Joey B & Him ‘Fought’ And...